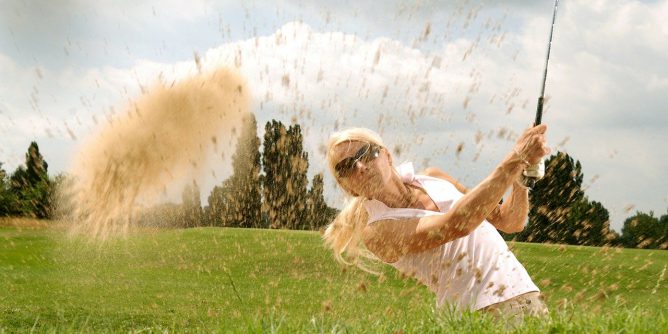 As sports go, golf is one of those which is often considered boring or slow. Some people prefer faster sports like horse racing or even football, where there is more action. Clearly, they haven’t seen a golf club being dropped during a swing, hurtling like a projectile towards someone’s face. That can be very scary. Golf can be a very interesting sport, which is also surrounded by interesting facts. There are plenty of facts which you surely do not know about golf. Here are just a couple of them, to show you what golf can be like.

Golf Balls Were Once Made from Wood

Hardwood like beech and box were once used to make golf balls. Made from the 14th to the 17th century out of wood, these balls made the lives of golfers harder. They would break after a couple of swings and would need replacement. Carpenters had a lot of profit out of this. Balls were also made out of feathers once, called a feathery. They were made out of leather skin, sawn together into a ball, filled with goose feathers, or other feathers. They cost a lot, around 20 dollars in today’s money. The price was due to the labor and material requirements. Luckily, we started making golf balls out of polyurethane and synthetic resin.

Golf Was Played in Space

In 1967, an astronaut named Alan Bartlett Sheppad Jr. took a swing in the Moon’s gravity. That was a spectacular sight, or so they say. The Moon apparently saw more sports, in the form of a javelin throw. Given how we are aiming at the stars, we are likely to see more sports played on or around the Moon.

Golf is Great for Working Out

People don’t see golf as much of a sport, rather a leisurely activity. It is not so, fitness sites assure us. An average golfer can burn around 400 calories an hour, provided that they walk the course rather than traverse it by golf cart. The next time you think of golf as a lazy sport, think again. 400 calories per hour is not a bad number at all.

America’s First Golf Course Was on a Farm

Charles Blair McDonald wanted to build a golf course. The odds of it being on a farm are not that low when you think about it. The Downers Grove farm was turned into an 18 hole course in 1892. To this day, it remains an active golf course, a historic site, though it has been reduced to 9 holes out of its previous 18.

These are the most interesting facts about golf, showing that it is more than a leisurely sport for the rich.